I thought it would be interesting to list any locations, ships, people or photos that are referenced in Better Born Lucky Than Rich. If you’re looking for some specific information please do let me know, I’d be happy to discuss with my grandfather and see if there is any detail which did not make it into the book.

Firstly – a picture from HMS Collingwood, a shore based signal school for initial Naval training, taken in 1940. 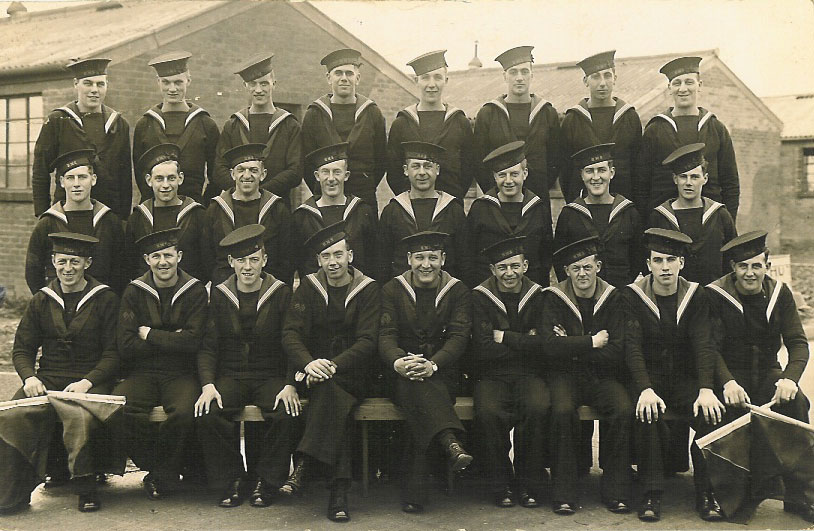 Written on the back are the names of those in the picture, as much as possible.

If one of these fine uniformed men was a relative of yours, please do let me know.  It would be great to know their stories.

HMS Collingwood was a shore based signal school, which held about 5000 people including Wrens, clerks, cooks, stewards, offices and recruits. A place where one of the first things to do on arrival in your new naval uniform was to package up your civilian clothes, put them in a parcel and address them for home. Something of a moment of no return.

My Grandfather went through basic training, rifle drill, marching and learning to be a signalman. Flags, secret codes, morse delivered by light or buzzer were all included in training.

The experiences referenced by my Grandfather include some comedy moments. From 23 men in one bunkhouse forcibly cleaning the final smelly occupant with a pan scrubber as he didn’t take the hint to do it himself, through to the final day unfurling of a pair of white pyjama bottoms instead of the flag during divisions. The other end of that spectrum is below.

“Each Sunday a group of Gruman Martlet trainer planes flew over the parade ground in a sort of salute when the whole company were on divisions. One Sunday, the planes came over rather earlier than usual. What nobody had noticed was that these were not our planes, but theirs, and they machine gunned the parade ground as they passed over. Unfortunately hitting the ranks of the wrens and killing several of them. Someone had done their homework and noted the regularity of the planes flying over.”

At the end of training at HMS Collingwood, my Grandfather chose to serve on ‘Little Ships’, which was anything from large anti-sub trawlers downwards, including harbour launches, minesweepers, torpedo boats and gunboats.

From here, the Minesweeping began.